I am a quite avid reddit user. Like it or not, reddit is a very central place where communities for stuff that I care about tend to aggregate.

For the longest time, I have felt the need for a reddit app on my Linux desktop, and I waited and kept waiting for one that would finally allow me to break free of using the web version.

Some honorable mentions are due to projects like the now seemingly abandoned Something for reddit and the terminal app Tuir.

Unfortunately they were not what I was looking for.

At some point I just decided to start scratching this itch of mine, and so my quest began.

And this is how Giara got to be!

At this current stage Giara is already usable, with most of the main features you’d expect from a reddit app to work.

Many people, including some familiar faces, stepped up and helped me in the development process, and I have already received some contributions.

It’s not 100% done, tho. It still needs to reach feature parity with the reddit web client, as features like awards, polls, galleries and private messages are still to be implemented. I’m also working on improving performance, as the app tends to be slower than I would prefer sometimes. All of these missing features and improvements are up next in my to-do list.

The app has also been recently moved to the World group in GNOME’s GitLab, and I’m incredibly happy for it! The next step now is to add support for the Damned Lies translation platform, so that it can be even easier to contribute new translations to the project.

As always any help and contribution is highly appreciated!

You can find the repo on GNOME’s GitLab and you can download the latest stable version of Giara from Flathub. You may also want to take a look at Giara’s website. 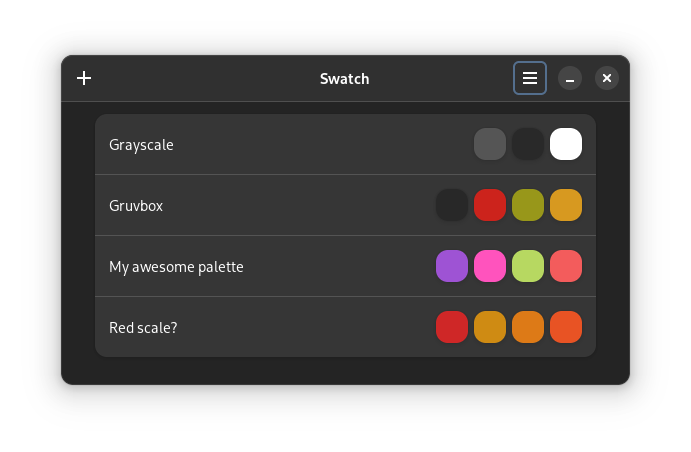 Between one thing and the other, I found myself in need for a palette manager: something to let me categorize different palettes and easily pick and name colors depending on their use.

One of the most requested features (and for a good reason) in Feeds has always been ad blocking. I never came around to implement it, mostly because I couldn’t find a guide or any similar resource, except for GNOME Web’s source code, and that’s not exactly easy to navigate.